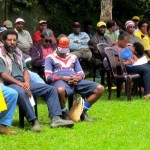 A senior health official in the Western Highlands Province has praised schools in Hagen Central and Mul/Baiyer Districts for helping to promote healthy living among their students and staff.

Director of Curative Health Services with the Western Highlands Provincial Health Authority (WHPHA), Dr John Kiap said health was everyone’s business and he was proud and happy to see schools taking it upon themselves to promote it.

Dr Kiap was addressing a gathering of senior teachers, principals and elementary teachers-in-charge of schools in Hagen Central, organized by the WHPHA to advocate and create awareness on the Health Promoting School Program, launched in the province recently.

The program is aimed at making children in elementary schools and students in community, primary and high schools and colleges to become change agents for health in their respective schools, families and communities to make the province a healthy place to live in.

The gathering was held at the Mt Hagen United Primary School and attended by more than 100 senior teachers, headmasters and principals of both public and private schools in Hagen Central District.

A similar gathering was held at Rugli Primary School for senior teachers and principals of schools in the Mul/Baiyer District a week earlier where they had also pledged to implement the program.

Dr Kiap told the senior teachers that the introduction of the health program in schools followed a Memorandum of Agreement (MoA) signed in June last year between the National Departments of Health and Education to engage schools to help promote healthy living in schools and the surrounding communities.

He said schools, and not health centres, aid posts and community health posts had been identified as the best places to promote health activities and the keen interest shown by the heads of schools to help implement the school health program was very much appreciated.

Dr Kiap said that the country’s population was growing at 3.8 percent per year. This was putting a severe strain on the resources available to health and it was nearly impossible to cater for such a rapidly growing population.

“Smoking and chewing betel nut can cause problems if the heart and lungs fail. We need to grow a healthy population for our future and schools are the best places to teach good health so that our children can become change agents for their families and the communities they live in”, he said.

The headmaster of a primary school said schools were fundamental places to teach children anything and the respective schools were prepared and ready to implement the school health program.

“We accept this program into our schools and settings because we see this is a good and successful way to teach our children about good health so that we have a healthy population to lead our future”, he said.