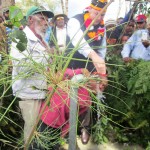 The people of Alkena in the Lower Kaugel area of Tambul/Nebilyer District in Western Highlands now have access to clean fresh water for cooking and drinking.

The water supply project which cost more than K60,000 to set up was officially opened on Sunday, 1st March 2015.

It was jointly funded by the Australian Department of Foreign Affairs and Trade and the PNG Government through a loan arrangement with the Asian Development Bank under its Rural Primary Health Services Delivery Program.

The opening of the water supply coincided with a ground breaking ceremony for a new Community Health Post to be built at Akena where more than 10,000 people would benefit from both services.

The Australian Minister and Counsellor for Development Cooperation at the Australian High Commission in Port Moresby, Mr. James Hall turned on the tap, signaling the official opening of the water supply for the people to use.

Mr. Bruce Davies, Asian Development Bank’s Vice President Administration and Corporate Management Operations said donor partners were investing a lot of money in such projects to improve the living standards of people in the province.

“We have built this water project to help improve your health because your lives are important. If you look after what is given, then you can expect more to come”, he said.

A spokesman for the people and community leader, Philip Talpa thanked the donors for funding the project.

He said people had to walk long distances to access good fresh water for drinking and cooking and they were happy that this will now be a thing of the past.

Mr. Talpa said his people had also been affected by water borne diseases such as typhoid and with the new water supply, he expected such cases to be reduced.