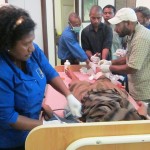 Three women and a man died instantly following a nasty road accident at Kuli Gap outside Mt Hagen along the Highlands Highway on 3rd March 2015.

More than 10 others were injured, some of them seriously and were taken to the Mt Hagen Provincial Hospital for treatment.

A Catholic nun was among those who were killed when a semi-trailer truck rammed into the back of a 15-seater bus which was loaded with passengers and parked on the side of the road near Avi in Jiwaka Province.

The bus which was travelling from Mt Hagen towards Banz in Jiwaka had stopped to observe an earlier accident involving a dyna truck and a 10-seater vehicle when the semi-trailer travelling downhill failed to slow down and ran into all of them.

When news of the accident which occurred at about 1.30pm reached the hospital, staff at the Accident and Emergency Unit were put on standby and went straight into work when the first casualties arrived.

Some of the casualties were seriously injured with broken limbs and suspected fractured skulls and were admitted for further observation while others were treated for minor injuries and released.

The entrance to the A&E Unit was packed and Hospital security guards had a hard time trying to contain the noisy relatives who tried to enter it and identify the dead bodies and the injured.

This is the second time in a space of about a month where Mt Hagen Hospital has had to attend to such casualties as a result of fatal road accidents.

On January 29, four women were killed following a nasty road accident at Togoba outside Mt Hagen. Twelve others were seriously injured when a 25-seater bus ploughed into a group of mourners who were walking along the road towards a village to mourn the death of a relative.

Chief Executive Officer of the Western Highlands Provincial Health Authority, Dr. James Kintwa said such deaths and injuries could have been avoided in both instances had the people observed proper traffic rules.

He said the people of Western Highlands needed to learn to respect traffic rules and keep well clear of roads and highways which were built for vehicles to use and conduct their social gatherings away from the roads to avoid getting run over by vehicles.

Dr. Kintwa also said that the deaths and injuries which occurred at Kuli Gap would not have happened had the driver of the 15-seater bus not stopped to see the site of an earlier accident involving two vehicles.

“An accident is an accident and the bus driver had no good reason to stop. He should have driven on because he had nothing to do with that particular accident”, he said.

He said when such accidents occur, it places a lot of unnecessary strain on the limited number of staff and services that are provided at Mt Hagen Hospital and urged motorists to be extra cautious when driving along public roads and for people to keep well clear of the roads when holding social gatherings.