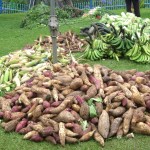 Mt Hagen Hospital in the Western Highlands Province has received yet another donation of food items to feed its in-patients.

This time it is garden produce and a live pig donated by members of the Jika Nungupi clan of Togoba in the Nebilyer area of Western Highlands.

The food was gathered as part of a Thanksgiving Day celebration following a week-long combined church service to thank God for providing and looking after the people over the years.

The food which included kaukau, bananas, taro, corn, cabbages, pumpkins, onions and the live pig were donated on Monday, 5th January 2014, less than one month after Trukai Industries had donated 100 bags of 10kg roots rice on 15th December 2014 and a donation of more garden food by the Paiakona Community in the Upper Nebilyer area.

The donation by the Paiakona Community is an annual event where they gather food and donate it to the hospital after holding combined church services every Christmas.

Nungupi Councillor, Paul Pagl said the Western Highlands Provincial Health Authority (WHPHA) was providing a good service for the people and his people would continue to donate food to the hospital every year.

He also said that his people numbering more than 800 lived on the other side of the Nebilyer River which was too far from the nearest Health Centre at Togoba and requested that the WHPHA build an Aidpost for them.

Chief Executive Officer of the WHPHA, Dr. James Kintwa said he did not expect such a donation of food items and live pig from the clansmen and thanked them for the kind gesture, adding that the pig would be killed to celebrate the opening of the new Stage 2 Building at the hospital later this month.

He said Mt Hagen Hospital belonged to all the people of Western Highlands and he wanted to believe that the clansmen were giving the food free and not expecting something in return.

Dr. Kintwa said health services in the province were provided under long term plans by the WHPHA and Togoba Health Centre was one of those under its plans for expansion and improvement.

He said Togoba would soon have a new 24-bed ward constructed to accommodate its in-patients and emphasized that this was not being done in return for the food that had been donated but it was something that had been planned to improve services there.

He further revealed that under the same plans, Kotna and Tambul Health Centres and Tinsley Baptist Hospital would be upgraded to District Hospitals starting this year with work on Kotna Health Centre already in progress.

Items, presents and cash during the Christmas period and donated them to the hospital.

The members led by their Parish Priest donated the food and K2000.00 in cash as well as presents for sick children during a gathering at the hospital on Boxing Day.