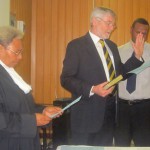 Second Board of WHPHA Sworn In

Members of the second Board of the Western Highlands Provincial Health Authority (WHPHA) have been sworn-in for another three-year term.

The members took their Oath of Office before Senior Provincial Magistrate, Mrs. Betty Jacob during a swearing-in ceremony at the Highlander Hotel in Mt Hagen on 4th December 2014.

Three other members who had been on the Board of Mt Hagen General Hospital since its inception on 30th June 1994 and later absorbed into the WHPHA Board when it was formed in March 2011 have been re-appointed. They are Chairman, Mr. David Guinn CSM OBE OAM, Fr. Garry Roche and Mr. Bob Hargreaves.

Mrs. Jacob said before swearing-in the Board members that they were taking on a big responsibility and she was confident they would do a good job in taking the WHPHA forward as they had done in the past.

She said having a mixture of people from the private and public sectors on the Board was a good thing as they contributed meaningfully in taking the organization forward and commended the WHPHA for doing a good job in delivering vital health services to the people.

Health Secretary, Mr. Pascoe Kase said through the Board, WHPHA had done great things and was far ahead of others in health services and commended the leadership of the Board and Management.

“Under your leadership things have moved and if you maintain that momentum, you will go a long way.

“We choose Western Highlands Province to host provincial health authority conferences because of good leadership and we are fully behind you and support you in everything you do”, he said.

Mr. Kase said the Chief Executive Officer, Dr. James Kintwa was like one of his deputies, contacting him regularly and giving his support and he was thankful to him for his continued support over the years.

Mr. Guinn thanked the previous Board members for their hard work and input and added that the new Board had a big job ahead and he expected all members to perform.

He also thanked Dr. Kintwa whom he said was the best CEO who was passionate about his work and led the senior executive management team and others well, resulting in good progress being made so far in health service delivery in the province.

He said business houses and individuals such as Pat and Margie Duckworth of Tininga Group of Companies and Daewon Trading had continuously supported the WHPHA over the years and he was glad Margie was on the Board.

Mr. Guinn said churches and Non-Government Organizations played a big part in the delivery of health services to the local population and he thanked them as well as the local community for their support and urged them to continue their good work.

Dr. Kintwa said he was privileged to work under a Board that was determined to see health services reach all parts of the province and the people of Western Highlands needed to acknowledge and appreciate the work done by such a Board.

He said under the leadership of Mr. Guinn who was a practicing accountant, Western Highlands has seen many good things happening in the health sector including the construction of new infrastructure and creation of more health facilities.