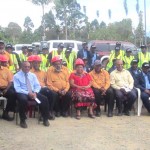 This follows the presentation of their new uniforms recently, aimed at boosting their morale and instilling a sense of pride and commitment in their work.

The presentation was made by the Senior Executive Management of the WHPHA to indicate its appreciation of the work and the important roles the drivers and guards played.

Director of Corporate Services, Ms. Julie Bengi said the security guards and drivers played an important role, saying they were a group of employees the WHPHA could not operate without like any other group of employees.

She said they were simple and humble people who worked like machines and brought services closer and the recognition by the management to buy new uniforms for them was very much appreciated.

“This is a workforce we cannot do without so talk and look at them with respect like I do. With them we can reach out far and wide and bring things closer, Ms. Bengi said.

Director of Curative Health Services, Dr. John Kiap said the demand for security in Mt Hagen and the Highlands was high, unlike on the coast where people listened and respected one another and it was good to see the WHPHA recognizing the guards.

He said security guards played an important role in protecting Mt Hagen Hospital premises as well as its patients and equipment and the presentation of the new uniforms was a good morale booster for them.

Dr. Kintwa said all employees of WHPHA must be proud of who they were and what they did as employees of an organization that provided a vital service in the City of Mt Hagen and in Western Highlands Province as a whole.

“People will know who you are and how you work. You are not only a driver or a security guard but an employee of WHPHA with its logo on your shirts and vehicles and you are a representative of this organization in everything you do.

“When you drive a WHPHA vehicle, be conscious that you are an employee of WHPHA. The public is watching you so don’t chew betel nut, smoke or drink while driving in public places because it portrays a bad picture of this organization”, he said.

He also told those who drove official WHPHA vehicles to stop at the right places and not any place where the vehicles shouldn’t be parked.