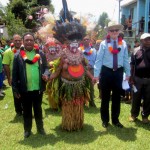 A program aimed at encouraging all schools in the Western Highlands Province to promote healthy lifestyles in their respective schools was launched at St Mary’s Ulga Primary School in the Nebilyer area on 3rd December 2014.

The Western Highlands Provincial Health Authority (WHPHA) is encouraging health promotion and prevention in schools and communities in order to reduce sicknesses among the population and improve the health status of communities and the province as a whole.

The Chief Executive Officer of WHPHA, Dr. James Kintwa said the priority of the Provincial Health Authority is to help and facilitate changes of the lifestyles and behavior of everyone and this means going to the schools, villages and other places where diseases are and prevent or stop them from spreading.

Dr. Kintwa said the Health Promoting School Program is aimed at getting the selected schools to keep their classrooms, teachers’ houses, playgrounds, toilets and the general environment clean and tidy including having clean drinking water to stop diseases from breeding and introducing health promotion messages in the curriculum, good nutrition and good playing facilities.

He said a certain number of schools throughout the province would be selected to participate in this program which would run from 2015 – 2017 and it is hoped that at least 35 schools would be qualified as healthy schools by the end of 2017.

He added that it would cost at least K1.5million to implement this program over the next three years to help prevent diseases and promote good health instead of curing sicknesses.

“We want to prevent diseases and promote good health in schools because we do not want children to get sick so they can get a good education. Health and schools must work together because children are our investment for our future.

“Children can become change agents in our villages and the WHPHA is prepared to spend this amount of resources. I want to come to you to ensure we prevent curable diseases. We are losing a lot of good people so we must change our lifestyles and be healthy”, Dr. Kintwa said.

He was also thankful to the PNG Government via the Asian Development Bank (ADB) through the Rural Primary Health Services Delivery Program (RPHSDP) and the Australian Department of Foreign Affairs and Trade for their continued support in health service delivery in the province. He also revealed that two vehicles had been bought under the RPHSDP – one for the Health Promoting School Program and the other for the Healthy Village Project.

Chairman of the WHPHA Board, Mr. David Guinn told the gathering that much illness can be prevented by advocacy and social mobilization for promoting healthy schools.

He said through health education, promotion, prevention and protection programs in schools, children would participate in health promoting and healthy school based activities and learn by practice to develop healthy behaviours that they would be able to carry on into their adult lives.

“When a child grows up with an adequate education, a balanced diet, a safe place for play and exercise and a place which provides emotional support then that child is best equipped to meet the challenges of later life”, he said.

Mr. Guinn said good health and good education were interrelated and produced successful learning, adding that an informed, educated young person would be more likely to have self esteem and avoid tobacco, drugs, alcohol, HIV and unwanted pregnancy.

“With your help and participation we look forward to a life for all our children where each individual can make a positive contribution to his or her own health and further contribute as a productive member of the community, district, province and the nation”, he told the crowd.

Secretary for Health, Mr. Pascoe Kase commended the WHPHA, saying Western Highlands was a leader in health. He said 10 years ago the province was at the bottom of the national health indicators but now with good leadership and good initiatives, it has moved up to be in the top three provinces in the country.

He said the Provincial Health Authority had a good CEO and Board that were determined to provide good health services to the people and the National Health Department would continue to support their initiatives.

Mr. Kase said he believed prevention was better than cure and he was sure the two vehicles that had been purchased under the RPHSDP would be put to good use to promote healthy living and prevent curable diseases.

He said it was good to see many health facilities in the province were now being improved with new infrastructure and the National Health Department would buy enough medicine to stock them and others in the country as of next year to treat those who get sick.