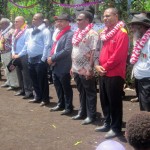 The Western Highlands Provincial Health Authority (WHPHA) will now concentrate more on promoting healthy living rather than clinical health services to make people take ownership of their own health.

Chief Executive Officer of the WHPHA, Dr. James Kintwa says he wants to see people, particularly communities taking responsibility for their own health to avoid diseases attacking them.

He was speaking at Sanap Village in the Baiyer River area of Western Highlands in early December during the launching of the province’s first Healthy Village Project.

Dr. Kintwa said the Provincial Health Authority had already selected 10 sites to set up the healthy village project however there were plans to set up another 18 in the four districts between 2015 and 2017, bringing the total to 28 and costing over K1 million to set them up.

The Healthy Village Project is aimed at making the communities live in a clean environment by keeping their homes and their surroundings clean, having clean water for cooking and drinking, building good and proper toilets for each family and producing and eating healthy garden foods.

Dr. Kintwa said at Sanap Village, a Community Health Post (CHP) would also be built as part of the National Health Plan for CHPs and Healthy Village Projects to go together to promote healthy living and getting the communities to take ownership of their own health.

Health Secretary, Mr. Pascoe Kase when officially launching the project thanked the WHPHA and local Members of Parliament including the Member for Mul/Baiyer, Hon. Koi Trape for introducing the healthy village concept in the Western Highlands Province.

He said a lot of people, especially the older ones who could live a little longer died early because of the poor health conditions that they lived in.

Mr. Pascoe said with the introduction of the healthy village concept, people would be better educated on how to look after themselves and the environment they lived in and this would result in less diseases attacking them.

“Take less people to the hospitals. Look after your health well through these kind of projects and live healthy lives and get less sick”, he said.

The Health Secretary also announced that in the first quarter of next year, the new Community Health Post would be built at Sanap and staffed by three health workers including a midwife, bringing much needed health services closer to the people.

The CHP will be funded by the PNG Government through a loan from the Asian Development Bank under the Rural Primary Health Services Delivery Program. All other CHPs planned for the province would also be built under the same program.

Mr. Pascoe said supply of medicine for these facilities would not be a problem, adding that the Health Department would buy plenty next year for all facilities.

He said however that staffing was a big problem throughout the health sector and the PNG Government and Australian Department of Foreign Affairs were now considering funding new nursing colleges and maintaining existing ones in order to train more nurses.

Member for Mul/Biayer, Hon. Koi Trape thanked the WHPHA for introducing the new healthy village concept in his electorate and the people of Sanap for giving up their land and urged them to look after what was provided in order to benefit from it.