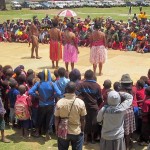 Women of child-bearing age in the Western Highlands Province have been urged to get immunized against tetanus to protect themselves and their unborn babies from getting sick.

Director of Curative Health Services with the Western Highlands Provincial Health Authority, Dr. John Kiap said when tetanus affects the nerve system of the body, drugs will become resistant and will not cure any illnesses that may occur.

Dr. Kiap was speaking during the launching of the 2014 National Health Week at the Queen Elizabeth Park in Mt Hagen recently. The annual event titled, “working towards eliminating tetanus” was held throughout the country from 18-22 August 2014.

Dr. Kiap said people must help themselves by getting immunized to prevent diseases from entering their bodies and causing illnesses.

He said Mt Hagen Hospital had a bed capacity of 300 which was just not enough to cater for the many patients that require admission for further observation and treatment and urged the public to protect themselves from being sick by getting immunized.

“Knowledge is power so listen to the health messages that we are giving you and do as we ask and you will live healthy lives”, Dr. Kiap told the crowd.

A drama by a local theatre group from Tiria in Togoba and DOTSY the health mascot provided entertainment for the crowd that turned up to witness the launching.

Health teams from the Western Highlands Provincial Health Authority joined by partners such as Susu Mamas then used the rest of the week to conduct awareness in the city and the rural areas of the four districts before embarking on the week-long immunization program.

Manager of Susu Mamas, Mr. Moses Moti told the crowd that his organization was also ready to help and if anyone wanted advice on family planning, they should see them as well as the health centres, urban clinics and Mt Hagen Hospital.

Another health partner, Marie Stopes, offered to provide women with advice on sexual and reproductive information, adding that getting immunized was a good thing to do as it protected the mother and her unborn baby from getting sick.

President of the Western Highlands Provincial Women’s Council, Mrs. Paula Mek who was to launch the program expressed disappointment that not many people had turned up to hear the messages.

“When Governor (referring to Rt. Hon. Paias Wingti) comes, such places are full but when there is a health promotion gathering, not many people are here.

“We should be listening to this kind of talk more than politics because doctors say things that will save our lives. When you get sick, don’t blame our doctors or Hagen Hospital but yourselves for not listening to good advice”, Mrs. Mek said before officially launching the National Health Week program in Western Highlands.