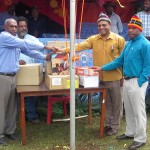 One of the oldest schools in the Western Highlands will now have a library to enhance the knowledge of the students and help improve their spoken and written English.

Ogelbeng Lutheran Primary School outside Mt Hagen took delivery of several boxes of books recently during a ceremony which saw the launching of the Library Project by a former student and current Chief Executive Officer of the Western Highlands Provincial Health Authority, Dr. James Kintwa.

Dr. Kintwa said when launching the Library Project that the idea of setting up a library for the school had been discussed by his family and work towards collecting the books had started some time back when his wife, the late Sr. Anita Kintwa was alive.

Dr. Kintwa said as a former student, he felt obliged to give something back to the school and the family felt that setting up a library was a good thing to do and he was happy to donate the books together with a K5,000 contribution from his family to start off the project.

The library project would cost more than K120,000 to set it up and Dr. Kintwa has appealed to all former students of the school to contribute in whatever way they can to help enhance the knowledge of the current and future students who would be the future leaders of the community and the province and the country.

He said good education at primary schools was the foundation for a strong nation and the learning environment must be good in order for students to acquire good knowledge and excel in life to be accountants, nurses etc to help contribute towards nation building.

But he said good knowledge and wisdom only comes from God and if students go to church on Sundays and listen to the Word of God being preached by their pastor and follow it, they will have a good future because God is the source of all good things in life.

Dr. Kintwa challenged the students to read more because by doing so, they would do well in both written and spoken English. He further challenged them to commit themselves to reading one book every week until they finished reading all books in the library and the students pledged to do so.

“I want you to say you have read all books in the library and you want more and I will get more books for you”, he said.

Dr. Kintwa also challenged the surrounding community to contribute towards the Library Project, saying this was a project for everyone. He would also write to former students whom he thought should contribute.

The launching also saw the donation of a personal computer set to the school administration by a businessman, Mr. Mark Sepi. When making the donation, Mr. Sepi said he had done this to his former primary and high schools in the Mul/Baiyer District and he was doing this to help Ogelbeng Primary School as well.

The 24 teachers and 700 students of Ogelbeng Lutheran Primary School said they were very happy for the initiative Dr. Kintwa had taken to launch the library with the donation of books and cash and they hoped other former students would help as well.

They also thanked Mr. Sepi for donating the computer set, saying this set together with another three which had been donated by former students would greatly help teachers to prepare their lessons well and teach the students.