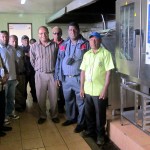 The Catering Section of Mt Hagen Hospital is now preparing meals for in-patients and their guardians using state-of-the-art equipment.

The Western Highlands Provincial Health Authority (WHPHA) took delivery of the equipment from the National Department of Health in early June however the official commissioning of the equipment had not been done until Wednesday, 13th August.

The nine pieces of equipment which cost a total of K336,000 was funded by the Department under its medical equipment and static plant equipment replacement program and was commissioned by its Manager Health Facilities Standards, Mr. Ambrose Kwaramb.

The equipment which includes gas burners, boilers, combi ovens, electrical rice steamers, griller, deep fryer, cake or dough mixer and a cooler were supplied and installed by TE (PNG) Ltd who also taught the catering staff how to operate them.

Mr. Kwaramb said the equipment was of high quality and the job of installing them was professionally done and he was grateful to TE (PNG) for a job well done.

He said with the recently installed 550KVA genset by NDoH, the kitchen can now be put on the standby electricity supply grid. The new equipment would also make gas and electricity consumption more efficient.

He also sympathized with the catering staff for putting up with the old equipment for many years and added that the equipment was not up to standard, yet the staff managed to cook the required number of meals each day to feed the in-patients.

Mr. Kwaramb thanked the Chief Executive Officer of the Western Highlands Provincial Health Authority, Dr. James Kintwa and his Senior Executive Management team for highlighting the need for such equipment and putting pressure on the Department to buy them.

He said Mt Hagen Hospital was the first to have a full industrial kitchen and urged the staff to take good care of the equipment and use them wisely as if they were bought by themselves and used in their homes.

The Chief Executive Officer, Dr. James Kintwa thanked the Health Department for purchasing the equipment and TE PNG for installing it, adding the selection of the latter to supply and install the equipment had been a good one.

He said the hospital cooked breakfast and dinner for in-patients from all over the province and the Highlands region as well as meals for meetings and other special gatherings at the hospital and the new equipment would make it easy for the catering staff to prepare these meals.

Officer-In-Charge of Catering, Arnold Ango said he and his staff were very happy for the new equipment and thanked the Health Department and the Western Highlands Provincial Health Authority for seeing their need and addressing it quickly.

Meanwhile, Mr. Ango said he has also introduced a new meal card numbering system aimed at providing meals to only genuine in-patients and their guardians and this has resulted in a lot of savings on meals.

He said under the numbering system, patients and caretakers have access to two plates per meal using one card which they pay K5 for upon admission and have their money refunded after returning the card upon discharge.

He said through the meal card system, the number of meals provided now was about 200 instead of 300 – 400 previously where anyone picked up a plate of food regardless of whether he or she was a patient or guardian.