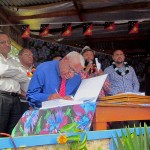 Vital health services will soon be restored in the Lumusa area of the Mul/Baiyer District of Western Highlands following the signing of a Contract recently for the construction of a new Health Centre in Lumusa.

The new Health Centre which will cost up to K9 million to build is an initiative of the Member for Mul/Baiyer, Hon Koi Trape MP, to replace the old one which was burnt down during a tribal fight several years ago.

A total of K5 million has been made available so far – K1.5 million by Mr. Trape and K1 million by Governor Wingti with these contributions equally matched by DFAT under its kina for kina policy to commence work on the new health facility.

The signing of the contract was one of a number of major impact projects for the Mul/Baiyer/Lumusa District which was launched by the Member for Mul/Baiyer at the Baiyer River District Office on 15th August 2014.

The launching of the various projects including the district’s Five-Year Development Plan, construction of Digicel towers for improved communication, signing of Contract for Lumusa Health Centre and distribution of vehicles and earthmoving equipment was witnessed by a huge crowd including the Minister for National Planning and Implementation, Hon. Charles Abel MP, Governor Wingti and Member for Anglimp/South Waghi, Hon. Komun Joe Koim MP.

The Contract for the new Lumusa Health Centre was signed by contractor, Nelson Watai of Kaim Building Construction of Mt Hagen and Chairman of the Western Highlands Provincial Supply and Tenders Board (PSTB) and acting Provincial Administrator, Mr. Joseph Neng.

The Chief Executive Officer of the Western Highlands Provincial Health Authority, Dr. James Kintwa who was present for the signing of the contract said he was happy for the support the local MPs were giving towards health services in the province.

He told the huge crowd that he did not think what was happening in health in the Western Highlands was happening elsewhere in the country.

He said good partnerships with church health services, donor agencies such as DFAT and the Rural Primary Health Service Delivery Program and support from Members of Parliament from Western Highlands has seen some improvement in health service delivery in the province and thanked them all for their contributions.

Dr. Kintwa said work on the Lumusa Health Centre would commence immediately with the K5 million already available and would be completed as soon as the rest of the funds are made available.