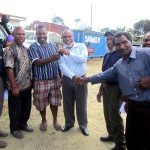 The soon-to-be-built Kotna District Hospital in Dei District of Western Highlands Province has been double-blessed.

Besides having the Lutheran-Church-run Health Centre upgraded to a District Hospital, it has also been given a brand new 10-seater Toyota Landcruiser ambulance to carry out its activities.

The Western Highlands Provincial Health Authority (WHPHA) has bought the ambulance for the new district hospital to replace the old one which has been used for the last 16 years.

The new ambulance has been bought in preparation for the new district hospital whose contract was signed on 5th June 2014. Construction is expected to begin as soon as the contractor mobilizes its building materials, equipment and staff to Kotna.

Deputy Chairman of the WHPHA Board of Governance, Mr. Michael Pundia officially handed over the keys to the new vehicle during a brief ceremony at the WHPHA Headquarters in Mt Hagen recently.

Mr. Pundia said the Board wanted to see health services reach communities in the rural areas and for this to happen, health facilities needed reliable vehicles for staff to move around and deliver those essential services.

He said recently a new ambulance was presented to Alkena Community Health Post in the Lower Kaugel area of Tambul District and this time Kotna Health Centre was getting one so that people’s health could be looked after well. He urged the facilities to look after the vehicles properly to gain maximum benefit.

The Chief Executive Officer of WHPHA, Dr. James Kintwa said the organization can have good plans and policies in place but without the support of partners it cannot deliver successfully.

Dr. Kintwa said health facilities were gradually being upgraded for better health service delivery including the Kagamuga Urban Clinic which is now in its design stage to be upgraded to a health centre.

He said with such work being carried out, staff must commit themselves to their jobs and carry out routine immunization programs instead of waiting for supplementary immunization activity which attracted allowances. He said such mentally must stop.