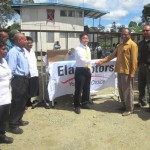 Motor vehicle dealer, Ela Motors donated the kits worth more than K200,000 as part of its cerebrations to mark its 50 years of operations in the country. It was witnessed by officials and staff of both organizations and members of the public.

Mr. Abe said Ela Motors had reached 50 years of operations in PNG on 23rd September 2013 and wanted to celebrate this occasion with the people of PNG by donating these kits.

He said the company had worked in close consultation with the National Department of Health and it had been decided that a number of health care kits numbering 50 each be donated to the four regional hospitals to serve their patients.

Mr. Abe said in the last two months, Ela Motors had made similar donations to Port Moresby General Hospital, Angau Memorial Hospital in Lae, Nonga Base Hospital in Rabaul and he was pleased to present the last lot of the kits to Mt Hagen Regional Hospital this time.

Chief Executive Officer of WHPHA, Dr. James Kintwa said when accepting the donation that it was a good idea for Ela Motors to share its 50 years celebrations with the regional hospitals as more people would benefit from the kits.

Dr. Kintwa said the Highlands region catered for nearly 50 percent of the country’s population and such assistance would benefit everyone because anyone would use them as long as they were admitted to the wards.

He added that some of the beds, pillows and sheets would be used in the new 2nd Stage Building (to be opened in July) while some would be given to the rural facilities to use.

Dr. Kintwa also said Ela Motors provides good support to the whole government with the durable vehicles that it sells and maintains so that government agencies like police, health etc could use Ela Motors for their vehicle requirements.

President of the Western Highlands Chamber of Commerce and Industry, Mr. Jim Leahy said it was good to see companies speaking with action.

He said WHPHA had spent a lot of money in Ela Motors for its vehicle requirements and it is good to see Ela Motors giving something back. “You give doctors and nurses tools to work with and they will use that to serve our people”, he said.