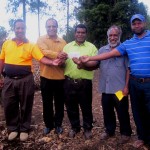 The people of Tipuka village near Ogelbang in the Hagen Central District of Western Highlands will soon receive health services close to their doorstep, thanks to the Member for Hagen Open, Hon. William Duma.

Mr. Duma has made available K100,000 through a local association, the Kekewati Community Development Association to fund a health facility in the area and the money was recently handed over to the Western Highlands Provincial Health Authority to build a community health post.

The money is part of a K1 million donation to the Kekewati Community Development Association by Mr. Duma about two years ago to facilitate various social and economic projects to benefit the Jiga Komapi clansmen and women.

During a presentation ceremony at Tipuka village recently, executives of the association including Chairman, Mr. Dot Kawagla, Treasurer, Mr. Bofua Kombati, Secretary, Mr. Ray Pungi and Deputy Chairman, Mr. Solomon Kiap said even though the money had been in their custody for quite some time, it was for a health service in the village and they just needed to find time to hand it over.

Work had already started on the CHP with funding of K120,000 from the WHPHA but the scope of work being carried out is a lot bigger for a CHP and the funding would help to complete the work.

Tipuka is one of seven places in the province the Western Highlands Provincial Health Authority has selected for community health posts to be built and the local leaders said they were happy for the decision which would bring health services close to their doorstep.

Chairman of the Association, Mr. Dot Kawagla said ground breaking for the construction of the CHP had already been done and construction of the staff houses and the clinical building has started and the K100,000 should now help to complete the project.

He said seeking medical services at the Mt Hagen Hospital is usually time-consuming with long queues at the Out-patients and the Pharmacy to see health workers and pick up medicines and he urged the local community to take ownership of what was being provided.

Association Secretary, Ray Pungi said the association had put together a development plan and proposal to see changes in the community and was fortunate that Mr. Duma had approved and funded it.

He said there were plenty of other places in Western Highlands that could have been selected for the CHP but instead Tipuka was one of those selected and he was happy for this decision. “We give special thanks to WHPHA for bringing such an important asset into our community”, he said.

The CHP would be staffed by a nursing officer and two community health workers and would have services such as an out-patients department, a minor procedure room, a birthing place and an overnight ward and conduct health promotion activities in surrounding villages as part of the CHP roles.

The Chief Executive Officer of WHPHA, Dr. James Kintwa who has taken the lead in constructing the CHP said the community had planned for an aid-post but after construction had begun, the buildings had turned out to be big and the facility is much bigger than a CHP.

Dr. Kintwa said he had hoped that there was money somewhere and that it would be given to complete this job and the presentation of the K100,000 had made his dream come true.

“We must give thanks where it’s due and I thank the Member for Hagen, Hon William Duma for this money”, Dr. Kintwa said.

He said the centre was big and would have three people working in it and the money would help to complete the current work but indicated that there would be a need for additional financial resources for two more staff houses.