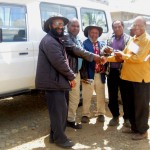 Critically-ill patients, expectant mothers and others from the Lower Kaugel area in the Tambul/Nebilyer District of Western Highlands will now have quick access to services from the Alkena Community Health Post or referred to higher level of services like Tambul District Hospital or the Mt Hagen Hospital.

This follows the purchase of a brand new ambulance for the Lutheran Church-run Alkena Community Health Post by the Western Highlands Provincial health Authority (WHPHA).

The vehicle, a 10-seater Toyota Landcruiser was handed over to the Centre by the Chief Executive Officer of WHPHA, Dr. James Kintwa during a ceremony in Mt Hagen on Monday, attended by health officials and local councillors and leaders from Akena including their Assistant District Administrator, Mr. Alex Misi.

It was a moment of joy and happiness for the leaders and their people from the 12 council wards in the area who had waited for more than 10 years to receive something like this to help them with their health needs.

Whilst the handover ceremony was being held outside the Provincial Health Authority Office in Mt Hagen, hundreds of people had gathered at Alkena Community Health Post to welcome the vehicle and received it with open arms and chants of applause when it arrived there after lunch.

The leaders said Alkena CHP had been operating from a run-down church building since 1992 with no ambulance to carry out its activities and the vehicle was a blessing from God to help His people.

They thanked the management of WHPHA for coming to their aid and said they looked forward to working closely with them to provide improved health services to the people of Alkena and the surrounding communities.

The Chief Executive Officer of WHPHA, Dr. James Kintwa said the biggest dream of this organization was to see health services go down to the communities and it wanted to distribute resources fairly and equitably among the four districts of Western Highlands.

Dr. Kintwa said the priority for WHPHA was Healthy Lifestyle (KRA 7 of the National Health Plan). Health promotion and disease prevention were important and the WHPHA Board of Governance had approved for their immediate implementation through the Healthy Village Policy. He said healthy schools and healthy village programs would be the two programs to encourage healthy living and prevent diseases from spreading and would be launched soon from Ulga Primary School in Nebilyer.

The councilors and village leaders in the communities are important change agents and are asked to take the lead to implement the healthy village and school programs once these programs are launched.

Developments and capacities will be improved for the different levels of services so that referral systems and modes of care recommended by the National Health Plan 2011 – 2020 are fully operational.

He added that work on Tambul Hospital was in its design phase while the Contract for Kotna would be signed this Friday, 16th May to pave the way for construction work to commence.

Dr. Kintwa said Alkena CHP was on Lutheran Church land and as long as the land title was in order, the donor agencies, DFAT (Australian Aid) and the PNG Government through loan arrangements with Asia Development Bank would fund the construction of the new CHP under its Rural Primary Health Service Delivery Program.

He also said that routine immunization outreach, antenatal clinics and school health programs must be carried out as well to prevent outbreaks of diseases such as the current outbreak of measles in the province. He added that if this was done, there would be no need for supplementary immunization activities and one day this could be done away with completely.

He encouraged the staff at Alkena and other facilities to use the vehicles provided to carry out these routine activities in order to improve the health of our people.