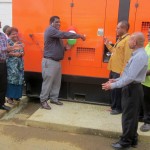 The new generator which cost more than K400,000 was funded by the National Department of Health under its medical equipment and static plant equipment replacement program.

He said this was an important capital investment and was funded through the Health Department’s development budget.

He said money is allocated through the recurrent budget for this particular program and it is managed by the National Department of Health for the entire country.

“The money is used for the replacement of outdated medical equipment and static plant and equipment for major hospitals throughout the country”, he said.

Mr. Kwaramb said there were two different components – one was for medical equipment and the other was for static plants including generators, sterilizers and other important equipment.

“We have been running this replacement program for about six years now with good government support or annual budgetary support and Mt Hagen Hospital has benefited from it”, he said.

He said apart from Mt Hagen Hospital, there were other hospitals that had benefitted from the same program and these included Wabag, Kundiawa, Wewak, Popondetta, Nonga (Rabaul), Modilon (Madang) and Port Moresby.

Mr. Kwaramb said the official commissioning and handing over of the generator was in line with the redevelopment of Mt Hagen Hospital as a regional referral hospital for the Highlands region.

He said a new incinerator as well as kitchen ware and medical equipment for Mt Hagen Hospital had also been procured under the same program.

The Chief Executive Officer of WHPHA, Dr James Kintwa said he appreciated the funding from NDoH to have a bigger capacity generator to power the hospital and offices during blackouts.

“The current generator is quite old and gives us problems at times and we are thankful to NDoH for buying this big generator for us”, he said.

He said with the redevelopment of the hospital, there would be more clinical areas, offices and other areas like staff houses hence increased electricity load and the purchase and commissioning of the new generator was timely.

Dr. Kintwa said the new generator would produce much more power than the current generator which can only produce 380KVA. He said with the current power consumption rate of between150-200KVA, there would be more power available which could be sold to neighbouring premises.