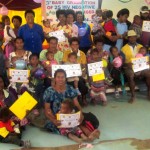 A program set up by the Western Highlands Provincial HIV/AIDS Services to provide continued care and treatment for people living with HIV and AIDS is proving successful for babies born from infected parents.

The Prevention of Parents to Child Transmission (PPTCT) program which has been running for the last four years has had a high success rate with more children born from HIV-positive parents testing negative to the disease.

In June last year, the first 20 such babies were released and in October, another 25 were discharged. Last week’s occasion meant more for one child, Johnnie Ricky, who also celebrated his second birthday on 4th April and he had the honour of cutting the release cake.

The PPTCT program has been set up jointly by the Western Highlands Provincial Health Authority (WHPHA) and Clinton Health Access Initiative (CHAI), a partner in the delivery of health services in the province to provide continued care and treatment for those living with the disease.

When the mothers test positive to HIV during maternal and child health and antenatal clinics, they are put on anti-retroviral therapy programs starting from the first month of pregnancy to delivery to prevent the unborn babies from being infected with the virus,

Upon delivery the babies are then tested three times for HIV – first at six weeks old, then at 18 months and the last at 24 months old. The children released last week tested negative to all three tests, resulting in their release as normal healthy children.

The children tested negative after their parents had faithfully gone through the program. The occasion to discharge them was an emotional but a happy one for both parents and children who were issued with Certificates of Release.

The Sister-In-Charge of the labour ward at Mt Hagen Hospital, Sr. Kolopu urged all pregnant mothers to attend maternal and child health and antenatal clinics so that their HIV status could be checked and put on treatment if positive.

She said these children could have lost their lives had their mothers not been checked and added that she was very proud to see so many kids now being released without the HIV virus.

“It gives me great joy to do more when I see big numbers of children graduating like this. I am happy because one day one of these kids may become Prime Minister, Member of Parliament, doctor or nurse”, she said.

Mt Hagen Hospital’s Deputy Physician, Dr. Kipas Binga thanked everyone involved in this program including staff of Tininga clinic and the labour and paediatrics wards for working closely with CHAI to achieve these positive results.

He said parents had a responsibility to ensure these children remained HIV-negative throughout their lives until they were old enough to get married and be on their own and urged them to take their medications faithfully and be healthy.

The Deputy Director for Curative Health with WHPHA, Dr. Madison Dat when officiating at the ceremony said HIV/AIDS was a challenge for everyone in PNG and what was happening in Western Highlands showed there was hope for those living with the disease.

He said the HIV-positive parents were heroes of this program as not many people were willing to let others know of their HIV status and their courage and commitment was greatly appreciated and acknowledged.