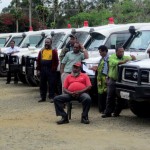 All vehicles owned and operated by the Western Highlands Provincial Health Authority (WHPHA) will now come under the watchful eyes of a Fleet Manager, Mr. John Greg.

This is to ensure these vehicles are used for official work only to save cost on their maintenance which uses up a lot of money as well as fuel and general wear and tear.

As a start, a fleet parade was held at the WHPHA Headquarters in recently in which all vehicles based in Mt Hagen as well as in the districts were brought in for inspection and stock-take.

During the parade, members of the executive management team expressed the need for the 40-plus vehicles to be looked after well and used wisely to deliver better and effective health services to the people of Western Highlands.

They said effective health service delivery depended largely on the use of vehicles to move around and urged all concerned to use them for work only and not for other purposes such as driving to alcohol outlets to drink.

Acting CEO, Ms. Julie Bengi said vehicles were useful resources for providing health services to the people and must be managed well, adding that the job of the Fleet Manager would not be that easy.

She said the position of Fleet Manager was new and challenging and urged everyone to co-operate with him to ensure all vehicles were managed well to gain maximum benefits.

“Management of vehicles creates more issues so John’s job will be to deal with those who do not perform and look after the vehicles well”, she said.

Ms. Bengi said a draft policy on transport is currently in circulation for management’s input and once approved by the Board, it would spell out clearly how the vehicles should be used and when they should be replaced with new ones.

She added that she was now in the process of organizing office space and a computer for the Fleet Manager so that details of all vehicles could be stored and service schedules drawn up so that they could be serviced when due for effective utilization.

She thanked all the drivers for their humbleness in carrying out their jobs and added that the management was happy for the good work they did in looking after their vehicles well.

Fleet Manager, Mr. John Greg said managing so many vehicles was a daunting task and he needed the help of everyone including the drivers, facility managers and the executive management to achieve the objectives of the new position.