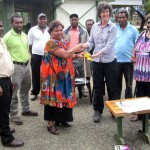 The Government-owned Kagamuga Urban Clinic outside Mt Hagen has re-opened after being closed for almost five months.

A meeting between concerned landowners, community leaders and executives of the Western Highlands Provincial Health Authority (WHPHA) has resolved to open its doors to the public after certain issues which resulted in its closure were ironed out recently.

The local community locked its gates and forced the closure of this major facility after they had learnt that the WHPHA had entered into an agreement with one of its health service delivery partners, Susu Mamas, to manage the facility.

They claimed they were not made aware of the change in management and also because Susu Mamas was a Non-Government Organization and they feared it may charge high fees for the services it provided.

After two separate meetings between the local community, community leaders and WHPHA, it was agreed that Susu Mamas operate the facility free of charge. It would operate for an initial period of six months and if all parties are satisfied with its services, the term would be extended.

Community leaders David Yak (also Board Member of WHPHA), Steven Yalda and the CEO of WHPHA, Dr. James Kintwa were very vocal about health services not reaching the population since the facility’s closure and urged the community to re-consider their decision.

They said NGOs such as Susu Mamas had a track record of providing effective and efficient health services and were selected to manage the clinic so that the local community could receive better health services.

Dr. Kintwa said the WHPHA had many health facilities but lacked skilled manpower to deliver essential services, adding that it was for this reason that it had agreed for its partners to manage some of them.

He said Kagamuga would soon be a Health Centre with services such as out-patients, delivery, x-ray and others so that people could receive better health services.

He added that the building which was funded by former Hagen Open MP, late Paul Pora, and the land title would remain the properties of the Government and would not be transferred to Susu Mamas as perceived by the people.

“Susu Mamas will not charge any fees for the services it will provide. They are an NGO group committed to providing service and they will be here from 8am to 4pm, unlike Government employees who are not fully committed to their jobs.

“I cannot and will not allow Susu Mamas or any other NGOs to manage Kagamuga if I feel they will not work well. Allow them to operate for six months and see how they perform.

“You and I are the eyes and if we see that they are not performing well, they will have to go”, Dr. Kintwa assured the local people.

A brief ceremony was held at the clinic early last month in which the keys to the facility were officially handed over to Susu Mamas by the acting CEO of WHPHA, Ms. Julie Bengi.

She told the small gathering that WHPHA had trust and confidence in Susu Mamas to deliver an effective health service to the local community and if they faced any hiccups, they should not hesitate to seek assistance.

Susu Mamas’ Provincial Team Leader for WHP and Jiwaka, Teresita Waki thanked WHPHA for recognizing them as strong partners in health service delivery and giving the facility to them to manage.