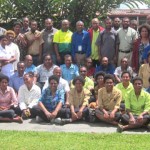 The staff spent the last two weeks of July going through all facets of the PNG Government and Public Service systems as part of their training to know the system they are in before they could be made permanent public servants.

Two senior training officers from the National Health Department in Port Moresby, Mr. Carmen Yakopa and Mrs. Julianne Aihi were in Mt Hagen to conduct the induction course. They spent the first week with 49 staff and the second with 56, putting them through theory as well as group discussions and practical sessions.

It was the first time for an induction course to be conducted in a PHA province and the National Department of Health which honored the request shared the cost of the training with the Western Highlands Provincial Health Authority.

A graduation ceremony and pledging of oath was held at the WHPHA Chapel on the last day of the course on 26th July in which all inductees pledged to serve the Western Highlands Provincial Health Authority and the Public Service with loyalty and commitment.

Executive Manager Corporate Services with NDoH, Mr. Paul Dopsie was the guest speaker at the ceremony. He said Health Minister, Hon Michael Malabag MP and Health Secretary, Mr. Pascoe Kase would have loved to join him on this occasion but because they were attending another big program in town – the launching of the Western Highlands Provincial Headquarters – they could not make it.

Mr. Dopsie told the staff that the introduction of the Provincial Health Authority concept in the Western Highlands Province was not a mistake – it was done through God’s divine plan, adding “you are doing very well and you are going way ahead and that’s because you put God first”.

“When your heart is right you are morally connected to God. When a sick person sees a health worker, whether you are a senior specialist medical officer or a nurse or CHW, you are very special and you are in God’s divine plan to make that person feel he or she will be alright”, he said.

Mr. Dopsie said the WHPHA was the face of health in Western Highlands Province and the Health Minister and Secretary wanted to meet with everyone from the senior specialist medical officers down to the cleaners but could not and had sent their apologies.

He said the world at large and donor agencies especially were seeing the Western Highlands Provincial Health Authority as a champion in the Public Health Authority concept, adding that without the WHPHA they would not stand tall.

“Western Highlands Province health is miles and miles away – you are the face of health in PNG. It is God’s divine plan to run this program (PHA) here and you are doing very well”, he said.

Mr. Dopsie told the staff that the WHPHA was doing well because it had good leadership as well as a good Board and Management to steer it in the right direction.

He also added that WHPHA was the first organization to have the Alesco concept payroll machine installed and soon it would have the PGAS accounting system transferred to Mt Hagen, enabling it to connect direct to Treasury at Waigani.